May 31 is World No Tobacco Day! 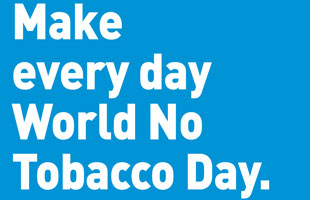 According to the Centers for Disease Control and Prevention, the global tobacco epidemic contributed to 100 million deaths worldwide during the 20th century and continues to kill nearly 6 million persons each year, including approximately 600,000 from secondhand smoke. If current trends persist, an estimated 500 million persons alive today will die from the use of tobacco products. By 2030, tobacco use will result in approximately 8 million deaths worldwide each year. About 80% of these preventable deaths will occur in low- and middle-income countries (1,2).

Increasing the price of tobacco products by raising tobacco taxes is one of the most powerful and cost-effective means to prevent and reduce tobacco use, but it is an underused strategy (3,4). Research shows that higher taxes can reduce the relative affordability of tobacco products, encourage smokers to quit, reduce cigarette consumption, and discourage young persons from smoking initiation. It also generates government revenues, which can be invested in effective tobacco control efforts that will further reduce tobacco use (3,4).

Also, take a walk to the Cushing Library, 333 Cedar Street, to check out the Selling Smoke: Tobacco Advertising and Anti-Smoking Campaigns provocative exhibit which highlights the tobacco industry’s clever and deceptive marketing propaganda as well as compelling anti-smoking strategies from the last century. It’s well worth it!

For information and resources on how you or someone you know can quit smoking or stop using tobacco products, check Being Well at Yale’s Nicotine Independence page.